Now that's I've made posts covering all of the domains in Van Richten's Guide to Ravenloft, I want to do a brief overview and review of the rest of the book's content. So far I've looked at Chapter 1: Character Creation, Chapter 2: Creating Domains of Dread, Chapter 3: Domains of Ravenloft, and Chapter 4: Horror Adventures, so now we're concluding with Chapter 5: Monsters of Ravenloft.

Chapter 5 begins with rules and suggestions for using monsters in a horror-centric D&D game. We get more tips for how to describe monsters, focusing on their "wrongness," using sense memories, and making the horror they represent personal to the players. There is also a section on the kind of tactics that monsters might use. Interestingly, "goblyns" (which used to be their own monster type in the 2e AD&D iteration of the setting) are now simply hobgoblins prone to devouring their foes alive.

There are also suggestions here for treating the various monstrous traits that creatures can have as Legos: essentially this is permission to modify stat blocks to create new bespoke creatures when needed by adding traits to pre-existing creatures. Additionally, this section contains rules for adding abilities to "minions" so that they are thematically consistent with the greater evil they serve. 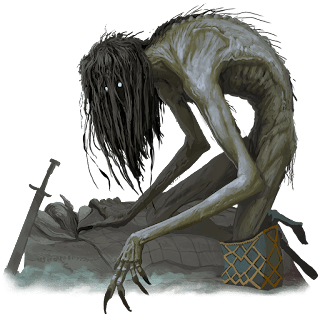 Next, we get advice on creating monsters "from scratch," which uses the "bagman" (a creature lurking in your party's bag of holding) as an example. Infamously, some people were upset that the bagman was not given its own specific stats, but as this section is basically a wordier retelling of my own advice to "just use bears," I'm pretty onboard with the philosophy being laid down here.

The rest of the chapter is a bestiary of monsters and nonplayer characters for Ravenloft. The monsters given full write-ups in this chapter are generally well-chosen given the horror focus of Van Richten's Guide: there's fiendish slasher killers in the vein of Jason or Michael Myers, evil marionettes, headless horsemen, gremlins that effect magic, hopping vampires, more powerful werewolves, feral vampires, and Cthulhoid terrors. Of course, there are monsters I wish were included from previous Ravenloft products, such as the poisonous women who serve Ivana Boritsi, but I'm sure hard choices had to be made. Overall, this is a strong selection of monsters that reinforces horror tropes.