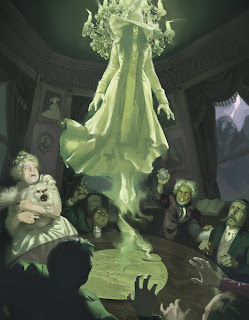 Now that's I've made posts covering all of the domains in Van Richten's Guide to Ravenloft, I want to do a brief overview and review of the rest of the book's content. So far I've looked at Chapter 1: Character Creation, Chapter 2: Creating Domains of Dread, and Chapter 3: Domains of Ravenloft, so now we're moving on to Chapter 4: Horror Adventures.

Chapter 4 opens with tips on how to set expectations for a horror game. It suggests that the players be given surveys about what kind of content and themes they want or are uncomfortable with, as well as what their gameplay expectations are. It also offers best practices for a "session zero" where expectations, boundaries, and house rules are discussed. I admit I've never done any of this in my own games, but nothing in this section jumped out at me as particularly onerous.

This section of the book also gives advice on more mundane details such as limiting distractions, using props, music, and lighting. It gives DM-facing advice for creating and sustaining a horrific atmosphere. I particularly liked the advice given in this section about how to describe things typically found in D&D adventures, such as what monsters look like, how they attack, and what kind of wounds they deal, in way that better suits a horror game.

This section also gives advice on using consent tools and deploying after-game discussion that amounts to "aftercare" to check in with the players to make sure that no boundaries were transgressed. Again, I've never used tools like these in my games, but I gather they are quite important to many people and nothing seems particularly outrageous in the way they're described here. 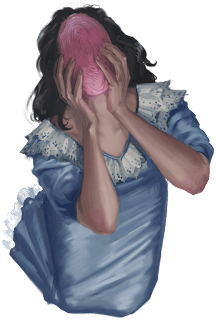 The next portion of the book is given over to a horror toolkit. Earlier editions of Ravenloft had extensive sections on curses, for example, which return here. The advice to deploy curses that can't simply be defeated with a remove curse spell feels like a fine suggestion; in fact, I've been doing that in my Gothic horror games for years. There are a number of sample curses that you can use straight from the book or as inspiration for your own creations.

Ravenloft has also traditionally had extra rules for fear, but the previous editions' Fear and Horror checks have been replaced by new mechanics. Van Richten's Guide details "Seeds of Fear," particular phobias or objects of fear that grant Inspiration when a player roleplays their character's terror in response to them. These "Seeds," as well as other fearful things, can force saving throws against gaining the frightened condition. This section also introduces a Stress mechanic. Each character gets a Stress Score that increases as a character encounters stressful things; this Stress Score counts as a penalty to attack rolls, ability checks, and saving throws. The Stress rules feel a bit like they were inspired by Darkest Dungeon.

A number of "Haunted Traps" are also detailed in mechanical terms. Like the sample curses, these can be used as presented or used as models for traps of your own devise. 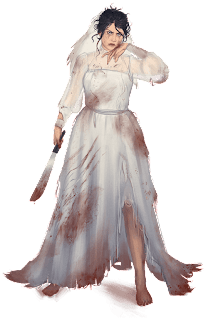 Horror Adventures presents rules for playing "Survivors," characters that are not nearly as powerful as standard 5e D&D characters. These Survivors feel a bit like 0-level characters or funnel characters from other games; they are intentionally meant to be more "mundane" to heighten the feeling of their frailty in a monstrous, unforgiving world. There are four broad types or classes of Survivor: Apprentices (arcanists), Disciples (the religiously empowered), Sneaks (rogue-lites), and Squires (warriors). Survivors do, however, have the opportunity to level-up. Every Survivor can achieve "third level"; at each level they gain a new talent from a small list. The list of Survivor talents feels like an excellent place for homebrewers to intervene and expand the scope of what is presented here.

This section of the book is concluded with an actual adventure, "The House of Lament." As I have not run the adventure yet, I want to refrain from commenting on it too much, but it looks like a solid introduction to Ravenloft. And it stealthily introduces yet another domain and Darklord!