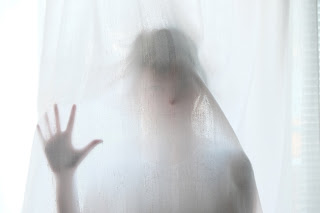 I've been running the adventures in Candlekeep Mysteries lightly reskinned for my Krevborna setting. The characters are all employed as members of Creedhall University Library's "Special Collections Department," aka adventurers. This is a recap of what happened in "Sarah of Yellowcrest Manor." Fair warning: spoilers lurk below.

Rising Leaf and Tobias were summoned to a particular section of the library to deal with a problem: namely, that it was haunted. Whenever the name "Sarah" was said aloud in one area of the stacks, the ghost of a young woman would appear--her tongue missing and her body riddled with stab wounds.

Tobias went in search of an old library custodian who would be familiar with any killings in that section of the library, while Rising Leaf looked for any books in that area bearing the same tree symbol that the ghostly woman had on her servant's uniform. No murders in the library were known, but Leaf did find a book that appeared to be the spectral woman's autobiography. The earliest pages of the book were just clumsy repetitions of her name, as if she were practicing her writing. This was followed by lists of household chores. Eventually, toward the middle, the book turned into a diary of undated, jumbled entries. The final entry describes spying upon her employer, Lord Vialis, as he studied a magic circle with some sort of viscous fluid contained within it. This entry was accompanied by a rendering of a monster with bulbous, multifaceted eyes.

Investigating Lord Vialis uncovered that he was once the owner of Yellowcrest Manor, which had been the site of a horrific massacre. His wife, children, and servants were killed while he was away on business. Rumor had it that all the slain had their tongues severed. After these events, Lord Vialis moved to the village of Greenfast, though he still owned several tanneries in town. Conversation with a drunken tannery employee revealed that Lord Vialis never returned to Creedhall to tend to his business; instead, he sent a man named Faerl to collect the profits and distribute wages.

Tobias and Rising Leaf decided to stake out one of the tanneries to observe Faerl. Faerl arrived in a large, ostentatious carriage. He was a dandy with a huge floppy hat, and was flanked by goons and sellswords. Tobias and Leaf decided to shadow Faerl and his crew back to Greenfast. The duo debated whether to break into Faerl's home during the night, but decided to ask around in Greenfast instead.

They spoke to Old Fargo, the owner of Greenfast's tavern. Old Fargo didn't have kind words to say about Lord Vialis, whom he regarded as a bad influence. Old Fargo's son had fallen in with Lord Vialis; Old Fargo hadn't seen him in over a month. The pair also learned that Lord Vialis had taken possession of a ruined tower to the south and was supposedly refurbishing it as a rural retreat. The tower became their next destination.

The tower was indeed in ruins. Tents, presumably for workers, were pitched nearby, but they were all empty. In fact, there was no activity to be seen around the tower. If the tower was being restored, work was going slowly--or not at all.

Tobias and Leaf climbed to the top of the sundered tower and peered down into it. Inside, they saw that the interior was lit by braziers shedding an eerie blue light. The walls were carved with hideous otherworldly forms. The chamber was occupied by four people and two hovering creatures that looked like brains sprouting tentacles and bird-like beaks. An attempt to leap down into the tower to take those within by surprise was less than successful; however, after a hard fought battle in which heavy injuries were taken, Leaf and Tobias managed to best their foes.

Further exploration of the tower, and its depths, revealed clear signs of cult activity. One underground chamber was a workshop devoted to the carving of wooden tongues. Meddling with the items in another chamber resulted in Leaf and Tobias falling into a barred cell facing another cell full of kidnapped people intended for sacrifice by Lord Vialis's cult. Ultimately, our heroes found themselves in a profane chapel with a monstrous statue with multifaceted eyes that matched the picture Sarah had drawn in her diary. Within the chapel they faced cultists, more grells, and Lord Vialis himself. However, before they could deal a death blow to Lord Vialis, he was grasped by a massive, clawed hand that reached through a dimensional portal to pull him to safety.

The ritual chambers of the cult were deactivated by Tobias's magic, thereby allowing Sarah, the ghostly servant haunting the library, to seek the sleep of ages. The captives were released and the cultists who had been subdued were turned over to the locals of Greenfast for whatever justice they saw fit to dispense.