The horror movie train don't stop for no one. Here's more of what I've been watching in October as I marathon horror movies: 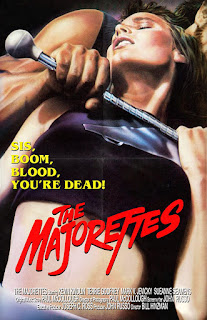 Sometimes you're just in the mood for a trashy 80s slasher movie and nothing else will hit the spot. The Majorettes was surprisingly not bad for this sort of thing. It's got all the elements you expect (murders, shower scenes), but it also has some unexpected texture to it. Oddly, toward the end it effectively stops being a slasher movie and morphs into a "criminal delinquents on heat" sort of movie. Everything comes full circle, of course, but the brief interlude of gunplay and explosions did serve to liven up the formula a bit. 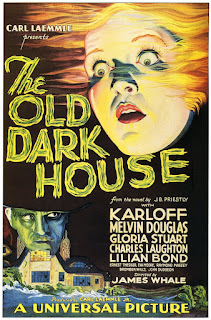 I saw The Old Dark House for the first time last year, but I enjoyed it so much that I was totally down to watch it again when my girlfriend requested an old black and white spookfest as our next movie pick. With its characters straight out of central casting, its titular old dark house, and the charmingly dated elements of the movie, you just can't go wrong with The Old Dark House. All that and Boris Karloff? Get out of here! Unbeatable mix. This is one of the few horror-comedies that really gets it right, in my opinion. 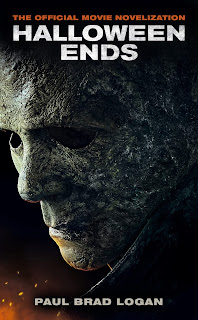 What an absolutely garbage movie! Shame on the director for fooling us with the first film in this trilogy, which actually seemed intent on both enlivening the franchise and exploring trauma as an aspect of horror. Halloween Ends betrays both of those goals. Not only does it come up empty on figuring out something new to do with Michael Myers, who doesn't even show up until over forty minutes into the flick, it ultimately has nothing worth saying about trauma too. Add in some ridiculous turn of events that don't make much sense in the context of the trilogy as a whole, some oddly placed boomer romance, a meet-cute that beggars belief, and a lack of any tension, and you got yourself a recipe for frustration and disappointment. At least we can all get back to pretending that there is only one Halloween movie and that the sequels don't exist. 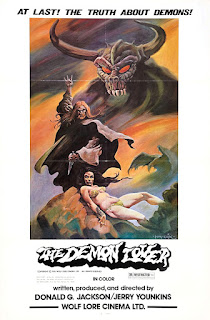 Unfortunately, the movie bit of The Demon Lover doesn't hold a candle to the great painted-on-the-side-of-a-1970s-van art from the poster. The premise is pretty funny: a black magician feels jilted when his coven, who are only in it to party, man, get fed up with his dictates and leave him. In revenge, he summons a demon to kill them off. The only even slightly interesting thing in this movie is that the warlock character is very much a type I've encountered in real life: way too into the occult, way too into karate, and when you go to his house for the first time you're dismayed to see a Nazi flag inexplicably hanging on the wall. Oh yeah, a bunch of character names in this are references to horror and comics luminaries, but with a movie this bad it feels more like a slight than an honor. 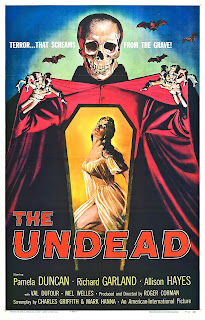 Oddly, The Undead has nothing to do with the undead; it was instead a cheapie horror flick created to capitalize on the then-current cultural fascination with reincarnation! As an experiment, two scientists send a prostitute's psyche back in time to experience her past life as a medieval maiden accused of witchcraft. Interestingly, this movie has a real moral dilemma to it: is it better for the medieval woman to face her execution and insure that she will live other lives, even though some of those lives are terrible, or is it better for her to escape immediate death and live with the man who loves her? Really fun little movie. Also, the brunettes in this movie are something else. 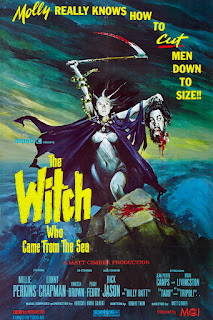 The Witch Who Came From the Sea

I was not adequately prepared for The Witch Who Came From the Sea! Frankly, I was expecting some sort of supernatural element--an actual witch, instead of metaphor. What I got was an insane psycho-sexual murder spree thriller in which a woman's idolization of her abuser creates a thirst for blood and...television?

Anyway, I love that Daphne and her never-ending avalanche of pills is frequently referenced by characters in the film, but we never actually meet Daphne. Stay mysterious, Daphne! Also, as my friend Steve pointed out, that badass poster is a total rip of a Frazetta work. 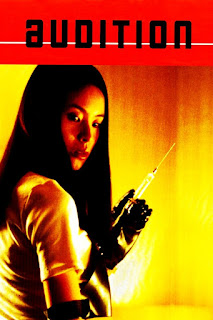 I first saw Audition on Halloween night in Whitby, and you know...I don't think I'll ever be fully prepared for the intensity of the last twenty minutes of this movie.

A widower makes the terrible decision to "audition" women to be his next wife under the guise of hiring someone to star in a forthcoming production. Of course, he gets more than he bargains for with the woman he chooses.

Not for the faint of heart or weak of stomach, Audition will leave a mark. 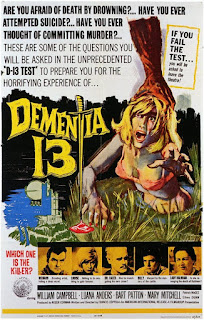 Made with the leftover funds from one of Roger Corman's movies, Dementia 13 was Francis Ford Coppola's first "real" film. It's definitely a Psycho ripoff, but it's admittedly a pretty good one. When a man's grief-stricken mother plans to leave the family's wealth to charity in the name of her deceased daughter, his wife begins scheming to get her hands on the loot. Little does she realize that there is more going on in Castle Haloran than she initially suspects.

One thing that's pretty funny about this one is that the Irish Haloran family has nary an Irish accent to be heard! 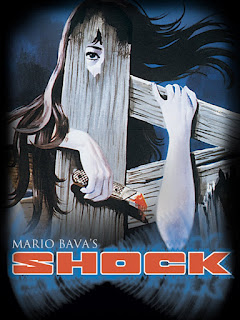 Shock was Italian maestro Mario Bava's last film, and to be honest it isn't among his best work. A late entry in the craze for films about possessed children, there's nothing inherently wrong with Shock, but there isn't much that is noteworthy about it either. There are some instances of strong imagery, but the real attraction--at least for me--is Daria Nicolodi's knock-out performance as a widow who returns to the house she lived in with her husband before his untimely death. Nicolodi does not get enough credit as a scream queen, in my opinion. 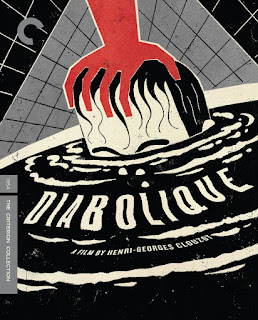 When I worked at a video store in the 90s, I did my absolutely best to watch everything in our measly "foreign film" section. Sometimes you'd get stuck with a ponderous, post-war meditation on sadness, but sometimes you'd hit on a real firecracker like Diabolique. Diabolique works in the Hitchcockian mode; an abusive man's wife and mistress conspire to kill him and free themselves from his tyranny, but not all is what it seems--especially when his body disappears before it can be found publicly and his death confirmed.