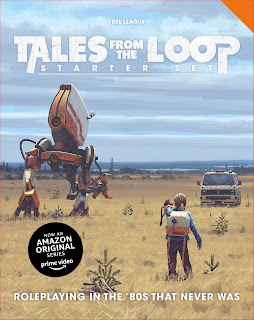 I've put my weekly D&D campaign on pause for the month of October so I can run a series of horror-themed one-shots instead. Last week we played a Tales From the Loop adventure in which the characters were kids investigating the strange behavior of one of their classmates.

Shane, a troublemaker whose anthem is Dio's "Holy Diver," played by Michael

Gene, a bookworm whose anthem is Barry Manilow's "Daybreak," played by Joe

Riley, a weirdo whose anthem is "Kiss Off" by the Violent Femmes, played by Aspen

Prior to heading off for school for the day, each of the kids had an unnerving encounter that set the tone for the day to come. Gene was pursued by bullies who taunted him that his mom was a drunk. Riley overheard her dad crying and talking to their mom about accidentally hitting a kid with a car. Shane was used to his parents already being at work in the factory when he got up, but on this Friday that were both still at home--smoking in bed with the tv blaring.

Things got even weirder when they arrived at Ahwaga Middle School. An IBM service van was parked in front of the school and a hulking construction robot stood on the school's lawn. The school's heavy front doors had been ripped from their hinges and thrown onto the ground. Mr. Thompson, the kids' history teacher, was laying injured on the grass and was being tended by the school nurse.

A few kids who had seen what happened filled in a few details. Charlie, a classmate of theirs who had transferred to the school at the beginning of the year, had been stopped by Mr. Thompson, who wanted Charlie to go see the school nurse because he was "acting weird." Another kid added the Charlie had been referring to himself as "we" or "us" instead of "I" lately, and behaving strangely. When Charlie tried to run away, Mr. Thompson grabbed him, and then the robot had come running into the schoolyard, tore off the school's door, and hit Mr. Thompson with it!

Riley crept closer to Mr. Thompson and the nurse. From their conversation, Riley overheard that no one knew where Charlie went and that his parents couldn't be reached at home or at work. Deciding that their classmate was in danger, the kids decided to play hooky, sneak away from the school before the ambulance and cops arrived, and look into the mystery themselves.

The kids walked to Charlie's house on the outskirts of town. It was an old farmhouse, with two grain silos out back. When no one answered the door, the kids scouting the perimeter. Gene discovered that every door and window was connected to an alarm system, but he was able to deactivate it using his nerdy bookworm skills. Inside the house, Riley found a half-written letter from Charlie's mom to a "sister." The letter expressed concern about Charlie's health or wellbeing; his mother wrote of how she had seen Charlie get hit by a car driven by "you-know-who," but Charlie denied that the incident happened at all. The letter also mentioned the recipient's home on Golmen Road. Riley related the contents of the letter, except for the part that implicated their father in driving the car that had struck Charlie.

The living room of the house was filled with strange aquariums and terrariums, each connected to tubes that ran through the ceiling to an upper floor. They also heard an unnerving sound coming from behind the couch; when it was moved aside, a large, two-legged "lizard" darted past them and up the stairs to the second floor. The kids were paranoid about being ambushed by the lizard-creature for the rest of the time they were in the house. (It was hiding under the parents' bed upstairs.)

The second floor was fairly standard for a family home, except for Charlie's bedroom. Although it had all the standard accoutrements of a kid's bedroom, such as a Duran Duran poster on the wall, one aspect of the room immediately struck the kids as bizarre: instead of a bed, Charlie had a long metal tube with flashing lights and computer readouts along the top of it. The tube was wired to the computer sitting on Charlie's desk. The kids' attempts to hack into the computer were fruitless--apparently the password to access the computer was not "password."

The third floor also held few surprises, save for the family's library. Bags from the Riverrow Bookshop indicated some recent purchases, which turned out to be piles of biographies of history's greatest scientists and books on spiritualism and seances. They had also spotted a number of family photographs of Charlie with his parents on a sailboat docked at Hiawatha Island on the Susquehanna River.

Before leaving, the kids also explored the two silos out back. The small silo held nothing but a round wooden table surrounded by chairs. On the table was a Ouija board and several burned-down candles. The larger silo held a number of cannisters of mysterious chemicals, like the ones fed into the aquariums and terrariums in the living room. Behind the cannisters they also found a (thankfully empty) child-sized coffin.

The Bunker on Golmen Road

Following the mention of a house on Golmen Road that Riley had found in the letter, the group set out to the other side of town. They almost missed their destination, as they were looking for a house but the building referred to in the letter turned out to be a moss-covered bunker--the kind of thing built by people paranoid about nukes falling in WWIII.

The bunker's door was suspiciously unlocked. Inside, they saw an astounding variety of experimental robots going about their business. Out of the darkness lumbered a particularly massive and menacing robot whose faceplate had been replaced by the head of a Cabbage Patch Kid. "Mommy?" the robot asked in a harsh, grating voice as it attempted to scoop Gene up into its embrace. Gene managed to dodge out of the way and Shane tackled the robot from behind, knocking it facedown. The robot said "Baby sad!" and then began to cry and kick its legs and arms.

Just then the kids heard the telltale sound of a pump-action shotgun as a woman's voice called out "Hey, what are you kids doing in here?" The woman emerged from the shadows; she was a wild-haired old crank in a filthy flannel shirt and sweatpants. Riley took the opportunity to sneak behind the woman and retreat further into the bunker to see what they could find.

Shane and Gene managed to convince the woman that they were friends of Charlie and that they were looking for him because they thought he was in danger. After explaining everything they already knew, the woman resigned herself to explaining the strangeness at work

Charlie's "parents" were unable to have a child the natural way, so they had worked with his woman (a genius former coworker of theirs at IBM) on making a bespoke son. Charlie's body was actually the reanimated corpse of a dead boy (which explained the coffin they found in the silo). To animate him, they had bound the spirits of the world's greatest scientists to his mortal shell (which explained the books in the library). The woman thought that the car accident had probably damaged some of his cybernetic implants, resulting in the various strands of ghostly personas that made up Charlie's sense of sense to become "unwoven" (which explained why Charlie had started calling himself "we" and "us" instead of "I".)

(Riley discovered a photograph of her dad being kissed on the cheek by Charlie's mom among the bunker woman's possessions; what a way to find out one of your parents is having an affair and ran their lover's kid over with the family car!)

The woman thought that Charlie was mostly likely either hiding out on the family's sailboat at Hiawatha Island or had sought shelter in the cooling chambers above the Loop's reactors. Before they left, she gave them a souped-up remote control that might be capable of turning off some of the cybernetic components of Charlie's system.

Shane "borrowed a boat from his uncle" (aka stole a rowboat) and rowed them out to Hiawatha Island. They spotted a strange luminescent construct in the water near the sailboat, but they managed to skirt around it without it noticing. Climbing aboard the sailboat, they found Charlie's parents hard at work on two computer terminals. After explaining who they were and that they had already spoken to Greta, the woman in the bunker, Charlie's parents said that Charlie had freaked out and accused them of being "their" enemies. They believed that they had come up a way to reunite the ghosts inside Charlie into a single, coherent personality, but they were afraid of approaching him after he turned violent.

The kids volunteered to try to subdue Charlie and bring him to his "parents" so they could fix him. Since both Greta and his parents had mentioned Charlie's fascination with the cooling towers at the Loop, so that seemed like the only place remaining where he might be hiding out.

The kids had to wait for the guards to be out of sight before they attempted to scale the chain link fence protecting the Loop's cooling towers from trespassers. Finding the correct tower proved easy; one of them had piles of robotic bits and pieces outside and the door was ajar. As the kids entered the tower, they took one last look behind them and saw the IBM security guards being chased by a robot lawnmower!

After scaling the tower's stairs, they found Charlie seated atop a throne made of deconstructed robots. He announced that "they" were the most intelligent super-genius to ever live and that "they" knew that their classmates were there to stop "them." On Charlie's right hand was a heavily modified Nintendo power glove--evidently a device of his own creation that he was using to take control of any robots in the area. Charlie demonstrated its power by activating three wolf-like robots that ran at the kids!

Shane juked to the right and Riley juked to the left, effectively splitting Charlie's attention and causing him to loose focus on which robo-wolf he was sending after who. This gave Gene the opportunity to press the correct combination of buttons to shut Charlie off. Charlie, and his wolves, all slumped to the ground, inert.

The kids carried Charlie out of the cooling tower and snuck away while the security guards were firing rounds into a now-unmoving robotic lawnmower. Stealing a red Radio Flyer wagon, they carted Charlie's body back to his parents' house, where they were able to place him in the strange "bed" and reprogram the souls within him into a single entity once more. Returned to normal, or at least as normal as a cyborg zombie boy inhabited by the spirits of long-dead scientists could be, Charlie sat up and asked them if they wanted to hear the new Duran Duran single.