Monsters Attack! was a short-lived, magazine-sized comic put together by the then-editor of Cracked magazine. Each issue features a number of horror comics, as well as articles about horror movies and all things gruesome. I got my hands on the first issue when it debuted, but the pharmacy I bought it from never seemed to get the following numbers. Now that I have a copy of the Monsters Attack! Ultimate Collection, I plan to go through the series' five-issue run and briefly review the comic content from each issue. We're in the home stretch--here's what is in issues four and five.
Issue Four

Stories and pencils by Mort Todd, inks by John Severin

Two graffiti artist pals, one with aspirations above street art and the other a crackhead, compete for the prize in an art contest. The first guy wants to put the prize money toward art school, the other needs the dough to pay off some goons from the criminal underground. When the first guy wins, the second lures him to his death so he can get his hands on the cash. All's fair in art and war, until the dead artist rises as a revenant and visits a strange and terrible revenge: he spray paints his killer's body, effectively suffocating him!

A powerful wizard uses terrifying illusions to coerce a noble into signing over his estates and then chases the poor peasants from their homes in what is now his realm. Only one tenant refuses to leave--a purported witch. When the wizard visits the witch's cottage, he finds a beautiful young woman, whom he promptly falls in love with. She even manages to convince him to let the peasants keep their homes. At the wedding, none dare tell him the truth: he has married the hideous old witch, and she's used even more powerful illusions to hide the fact from her spouse!

This is a weird one, and I'm not convinced it really belongs in a horror mag. A magazine magnate is convinced by a military man to fund a "luxury bunker" where they can wait out the imminent nuclear war. The magnate double-crosses his military partner, killing him right at the moment when the bunker's doors are sealed. Unfortunately, the magnate's life of excess catches up to him immediately: he has a heart attack. He's going to survive in the lap of luxury inside the bunker, but as a paralyzed victim unable to enjoy all the extravagances he's stocked inside. 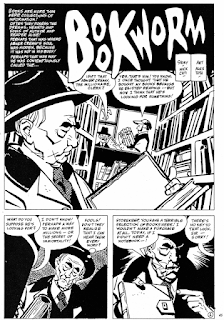 A man comes into possession of a magical book that allows him to achieve a limited form of immortality by living within its pages. Unfortunately, although he's managed to dodge the vermin who eat the dead, the book is beset by bookworms. The most interesting thing about this story is its history. The version in Monsters Attack! was drawn by the artist originally scheduled to draw it years prior for a Charlton comic. Alex Toth balked at Charlton's low page rate, so they commissioned someone else to draw it, which means that this story exists as two different comics! 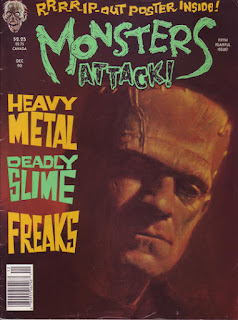 Note: The Monsters Attack! Ultimate Collection only features stories that Mort Todd had a hand it; he was ousted from the company before this issue was finalized, so the collection does not feature stories greenlit by the editors who took the reins after his departure.

Like "Circulation: Zero!" in the previous issue, "A Job Well Done" feels out of place in the pages of Monsters Attack! This one's a gritty crime drama about a righteous cop who gets in over his head during a drug epidemic. The hardboiled crime atmosphere works well, but this just isn't really a horror tale by any stretch. There's also a weird thing here where the bald cop characters all look a little too similar--normally, I'd guess that's a thematic element or there will be a reveal about it in the story, but that's not the case here.

I can't really say too much about this one as unfortunately a page is missing from this printing of the story, so I'm not entirely sure what is going on in the story. It's truly unfortunate that this one was misprinted; it's things like these the mar a really interesting and valuable collection of comics that a lot of people haven't seen and it belies the idea that this is actually an "ultimate collection."

The table of contents calls this story a "cautionary tale against mass consumption," but I'm not sure that's really accurate. Anyway, a jelly monster is indeed in the cellar and it dissolves a woman before the community gets together and salts it to death. This is one of the stand-out stories of the last issue, in my opinion. There's a bit of heart to this one that isn't always present in horror comics done in this style. 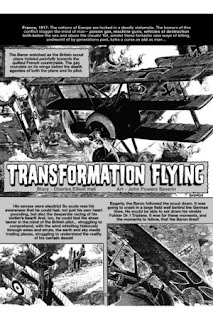 This story didn't appear in the final issue of Monsters Attack!, but it was intended to be included in the run at some point. It's a good tale too, with a fun premise: a German vampire fighter pilot squares off in a dogfight against a French werewolf. Vampires vs. werewolves is a classic battle, of course, but having the confrontation take place in the air adds a certain novelty to it. War is hell, even when monsters are involved.