In the Mists of Manivarsha 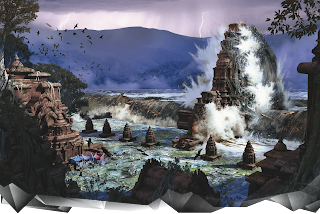 I've been running the adventures in Journeys Through the Radiant Citadel as part of an open table campaign on my Discord. Without further ado, here's how "Trail of Destruction," the eight adventure, went for my group.

Pushed into adventure once more by horrific dreams, the trio found themselves venturing to the war-torn jungles of Kalakeri, where they hoped to prevent the partisans of three river towns from engaging each other in bloody conflict. They arrived in the town of Sagorpur, just in time to view the final contest of the Trials, a series of events in which contestants from the three towns competed yearly for the honor of bringing a gilded conch shell back to their town until the next Trials.

The final competition of the Trials was narrative dance. The contestants were all obviously skilled, but the final contestant--a small woman in a red sari and golden headdress--was phenomenal. Even though the party was untutored in the art of dance, they caught the gist of her performance: her dance told the story of a town destroyed by a wild wave that arose the river. The group noticed that some people in the crowd had been moved to tears by her performance; each of the affected wore a red armband matching the woman's sari.

When questioned, one of the spectators explained that the woman's dance told a real story. There were once four towns in the region, but Manivarsha was destroyed by an uncanny wave that erupted from the river. He also told them that the dancer in the red sari was Amanisha Manivarshi, a descendent of the survivors of that cataclysm.

When the time came for the judges to award the gilded conch shell to this year's winner, it was no surprise that the trophy was presented to Amanisha. Unfortunately, the roar of the crowd was suddenly cut off when a pillar of water arose from the river behind the stage and crashed down on the town of Sagorpur. When the water receded, the immediate area was left cluttered with debris and injured townsfolk. The adventurers also noticed a strange green glimmer in the river's current, lending a suggestion of fell magic afoot. They also saw several people trying to enter the temple standing next to the stage, but the door was being guarded by two creatures that looked like spouts of water topped with giant, cobra-like heads.

After dispatching the watery creatures, the party entered the temple and consulted with Plabon, the High Riversinger and one of the judges of the Trials. Plabon informed them that each of the three towns of the region worshipped the river god they believed inhabited the river that provided the livelihoods of the townsfolk. Plabon also stressed that he did not believe that Iravati, the god of Sagorpur's river, was behind the wave that had just caused so much destruction.

Plabon was able to explain part of the party's shared dream: the loss of the sacred conch trophy could lead to violence, particularly against the Sagorpuri who might be blamed for its loss. When the green glimmer that they had observed in the river was mentioned, Plabon told them to seek out Dukha, a small-time river trader who had also reported seeing a similar glimmer in his travels across the region's rivers.

They found Dukha drinking in a tavern. The river trader explained that he had seen the strange green glimmer the party had noted in several tributaries in the region; in fact, he had followed the glimmer to a river called the Tinjhorna--where he claimed to have met the god of the river itself! The river spirit accused mortals of using foul magic to interfere with the region's waterways, though it could lay the blame on no particular folk. The party then hired Dukha to pilot them to the area where he had met the river god.

Setting off in Dukha's skiff, the group navigated the rivers cutting through the area's swampy forests. On their journey, the travelers encountered a mangrove treant who attempted to warn them off; the treant also noted that the "river gods" were not actually divinities--they merely posed as gods because they loved the adulation of the region's peoples.

After the encounter with the treant, Dukha moored the skiff on a small island near a series of parallel waterfalls. The isle turned out to be the hunting ground of a group of weretigers, but some quick-talking on the part of the adventurers successfully dispelled the weretigers' hostility. The weretigers pointed out a pool that fed the waterfalls and told them that it was the most likely spot to encounter the "river god."

The group managed to sneak up on the "river god" as it attempted to placate two water elementals that glowed with an eerie green phosphorescence. The party was divided in how to approach the "river god": Horatio and Brother Albany strongly suspected the river god was responsible for the wave that caused havoc in Sagorpur, but Gnargar (correctly) intuited that if the river god was trying to calm two elementals he must also have a vested interest in de-escalating the situation.

Calmer heads did not prevail. The group engaged the river god, who was surprised that mortals would dare attack him, and the water elementals sped to his defense at the first sign of violence. Gnargar and Brother Albany dealt with the elementals while Horatio entered a rage and tore at the river god. The river god proved to be a formidable foe; even though both Brother Albany and Horatio are seasoned combatants, the river god was able to fell both of them. A nearly dead Gnargar landed a killing blow against the river god and managed to revive his two companions before death could claim them.

After some much needed rest and healing, the group spotted glimmering ghosts in spectral boats rowing down the river. Following the direction they came from brought the party to another island. The isle was strewn with ruins that matched the temple back in Sagopur, and there was also a huge rotten tree stump upon which slumped an inert figure--an unconscious Amanisha! Once Amanisha was revived, she revealed that she had been brought by the magical wave in Sagorpur to this place--and that the river god was not responsible as her captor was a woman with gray skin and a rusted sword!

This woman soon made her presence known. Her gray skin was cracked and weeping a thick, sticky-looking red fluid; her mouth had sealed over, but when she spoke the skin of her face ruptured, sending a cascade of the red fluid over her rotten flesh. This woman called herself Jibisha; she was a competitor in the Trials from long ago; desperate to win the Trials she had made a pact with a demonic entity in return for supernatural skill. The Trials were held in Manivarsha the year she competed--her attempt to cheat resulted in the destruction of Manivarsha! Unwilling to see another Manivarshi win the trophy that she believed was her due, Jibishi had stolen both Amanisha and the conch.

Gnargar wisely rushed forward and ripped the sacred conch from Jibisha's grasp, greatly weakening her. Brother Albany then managed to stun her by manipulating her ki. Unable to defend herself, the group thrashed her soundly before she could recover.

Once Jibisha had been dispatched, the group heard a voice from beneath the rotten tree stump. The voice belonged to the "river god" of Manivarsha; he had been trapped and enslaved by Jibisha--she used his control over the waters of the region to create the wave that brought Amanisha to the island. However, since he was responsible for the destruction of Manivarsha, the group declined his request to free him from beneath the stump. Amanisha, a loyal daughter of Manivarsha, was pleased with their decision. She was escorted back to Sagopur with the conch, to much rejoicing.